Helping People Take the Next Step in Their Relationship with Jesus 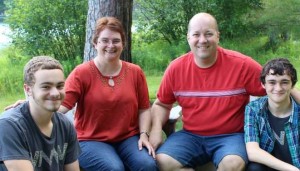 Pastor Rob grew up on the west coast of Florida in sunny Bradenton. After graduating from King College in Bristol, Tennessee, with an M.A. in Bible and Religion, he moved to Minnesota where he earned his Masters of Divinity degree from Bethel Theological Seminary. Rob served as youth pastor at an Evangelical Free Church in Ripon, Wisconsin, for more than a decade and it was there he met his wife, Rosalie. Their two boys, Jordan and Jonah, were born in Wisconsin and are all die-hard cheesehead Green Bay Packer Fans. Jordan currently attends the University of Northwestern, St. Paul, and Jonah will be joining him there in the fall of 2015.

Moving back to Minnesota in 2005, Rob served as Associate Pastor for Student Ministries in a couple of churches before taking a sabbatical from vocational ministry. Entering the world of retail, Rob worked at the Walmart in Pine City for four years where he moved his way to a position as an Assistant Manager before following God’s call back into full-time ministry at First Presbyterian Pine City.

Rosalie is a native of Ripon, Wisconsin. She worked for many years as a nurse’s aide and then a social service aide at a local nursing home while also serving as Christian Ed Director at a local church. After meeting and marrying Rob, she changed “careers” to become a full-time mom to her and Rob’s boys, Jordan and Jonah. In addition to being a pastor’s wife and mother, Rosalie also served as Administrative Assistant for Youth and Worship for several years at their church in Ripon. She has extensive youth and children’s ministry experience and employs her administrative gifts to keep both Rob and the church running smoothly.

Hansmann is an incredibly talented pianist and vocalist whose gifts are used each week in our worship services. Jen studied music at St. Cloud State and the University of St. Thomas and currently works teaching music at Pine City Elementary School. She is often seen using her musical gifts at various events around Pine City. She enjoys acting, as well, was was recently featured as a lead in the Heritage Players production of “Don’t Hug Me”. Jen is married to Wayne and the mother of thee boys, Mitchell, Austin, and Nick.